*The following was written by James Hickey, Cian Maher, Harry Walsh, Tadhg Horan and Jerry Davis from 5th Class. Well done to the boys on writing such a wonderful and comprehensive report on the matches.

It was a big week here for Scoil Phádraig Naofa with the Kennelly Cup and the shield final taking place on Wednesday afternoon. The Kennelly Shield final was played first and it proved  to be an exciting one. It was a great match from start to finish between Mayo and Tyrone.  Mayo had a great start and were four points up. However, Tyrone kept their heads up and Jerry Davis scored a goal to get Tyrone back on top before the second half.

It was tense going into the second half and Tadhg Horan added to the excitement when he scored a goal to bring Mayo back into the game. Kaiden Berry Foley from the Mayo team took a firing shot but Philip Majak made a brilliant save to keep Tyrone on top. Joe Davis worked hard to keep his team on top. Mr Phelans says’ He was an outstanding player and proved himself as captain’. After a late 45 from Jerry Davis – Tyrone took the title and won the game. It was a fabulous game and well done to all involved.

The cup final was like none other. The atmosphere on the pitch was electric as Kerry and Kildare made their way out onto the pitch. The game  was off to a great start with Scott Mc Donald scoring an exceptional point swiftly followed by an amazing goal from Ryan Redmond to put Kildare in the lead. Kerry came back fighting, scoring two wonderful points to let Kerry know they were still in the game. The first half finished up with Cian Maher scoring from a 45. Scores at half time were 1-2 to 1-6 to Kildare.

The second half certainly did not disappoint with Dylan Curtis of Kildare scoring not one goal but two goals. This did not stop Harry Walsh of Kerry who scored a point from a free. However, it was just a little too late for Kerry as Cian Maher took a quick 45 to pass the ball to Scott Mc Donald who tapped it over the bar to seal the win for Kildare. Well done Kildare! We would also like to thank all the teachers involved, especially Mr Phelan. We would also like to thank the parents and students who came to support! We are already looking forward to next year. 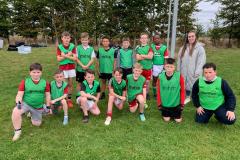 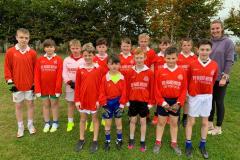 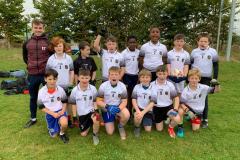 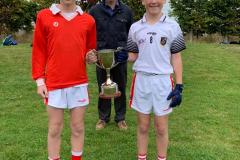 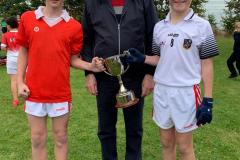 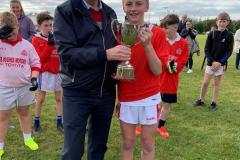 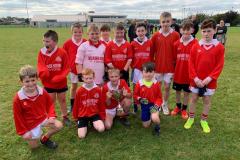 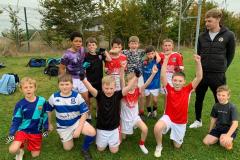