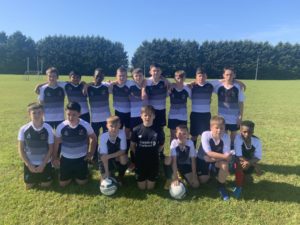 The soccer season got underway this week for SPN. The boys and girls teams both took on Kilcullen at Athy FC in very warm conditions. The girls team were defeated in the first match but did the school proud as for a lot of them it was their first time playing in a competitive match.

The boys team came out on top after a 4-1 victory saw them ease past Kilcullen. After conceding an early goal, the boys started to create chances and went in 2-1 up before half time thanks to goals from Kyle Norton and Callum Keaveny. More pressure in the second half from the lads and Caelin Walsh lobbed the goalkeeper with an excellent finish before Callum Keaveny grabbed his second of the match to seal the victory.

Next up for the two teams is a trip to St. Brigid’s in Kildare Town scheduled for Thursday September 26th.